I was pleasantly surprised to be reunited with my owl friends after almost a year without a close encounter.  I’m not sure what they were saying but a good guess might be something like this, “I hope Spring gets here soon, I’m nearly freezing to death!”

In reality, God’s creation speaks for itself – no interpretation necessary.  I just like to enjoy it!  For more on the owls – http://steadfastchristian.com/page3sc.html

The real story behind the economic collapse shouldn’t surprise you.  The middle and upper  class have been living way above their means while the average middle cla 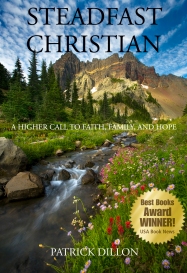 ss income has remained similar over the past two decades according to the US Census Bureau( http://www.census.gov/hhes/www/incomestats.html).

If the middle class average income hasn’t gone up much over the years while the cost of living has skyrocketed; how are they paying for the increases in food, fuel, transportation, education, housing, healthcare … ?  Again, the answer is fairly straight forward.  Credit cards and increases in home equity allowed them to keep up with increasing costs by going into debt, but not without a price.

For example, when I first graduated from college back in the late 1980’s, a modest home in my area could be purchased for $50,000.  Today, the same house would cost over $300,000 even in this depressed real estate market.  This same thing occurred in many desirable areas of our country.  Back then, I paid less than $100 per month for health insurance and today the same policy is four times as much.  The only thing that seems to have gone down in price is phone bills and computers.  Wages for the middle class have  not kept up with the cost of living increases.

As soon as the real estate bubble, which has been expanding since early 1990 blew up, all those who had already borrowed most of their home equity and whose credit cards were maxed out quickly found themselves in serious financial trouble.  With nowhere else to obtain necessary cashflow, many people couldn’t pay their mortgage and thus the house of cards came crashing down, crippling the entire world financial markets.   The financial institutions turned a blind eye to sound underwriting policies speculating that they could sell the mortgages to the secondary market (Fanny Mae, Freddy Mac …) before prices would decline.  The whole country including the government went into a spending frenzy and threw caution to the wind.

Well,  we are all paying the price with things even worse than before.  Today, the price of essential goods is on the rise even with our nation suffering nearly 10% unemployment.  At least before the crisis we had plenty of jobs.

In my opinion, we have two options:

1.  We stop living above our means and do everything in our power to get out of debt (best option).

2.  Go back to school and try to get the highest paying job with the best benefits possible.

We live in a society where economic indicators look solid if we spend more money no matter how much debt we’re in.  Companies have come to rely on our excessive spending to survive.  Our government is no exception to this rule.  We are labeled as consumers, not people. We simply cannot sustain these artificially high prices without going through a   rollercoaster ride of violent ups and downs.  If we all started to live within our means, our country would probably go into a depression but at least when we came out of it, prices would be much lower and our financial future would look a lot brighter.